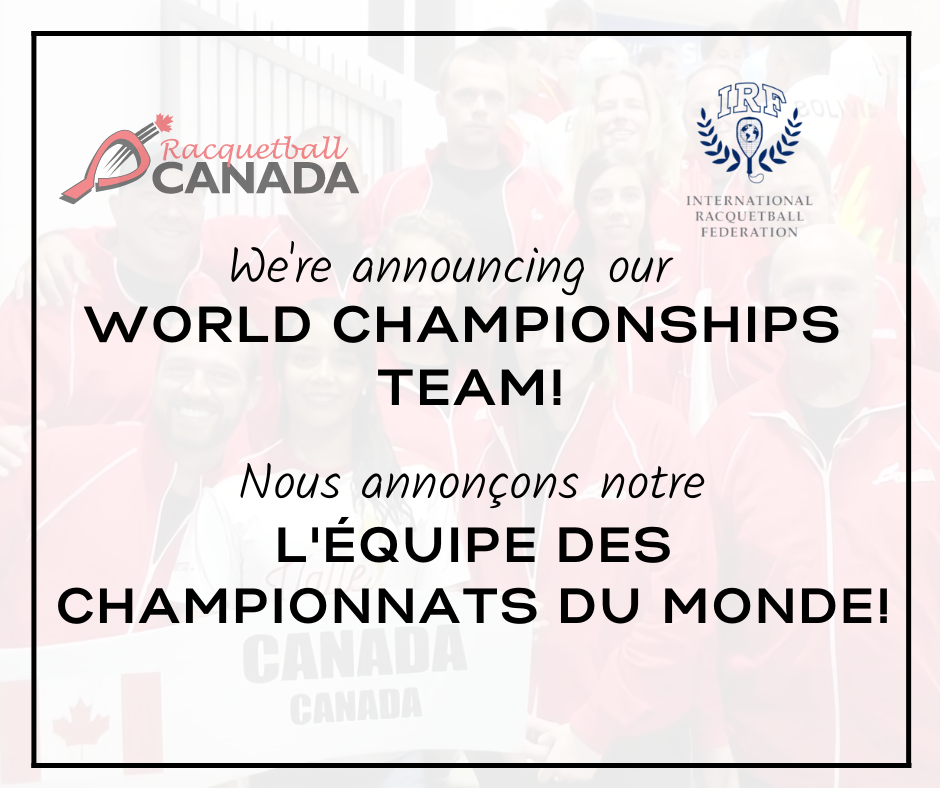 WINNIPEG, July 22, 2022 – Danielle Drury and Lee Connell of Saskatoon have been selected by Racquetball Canada to represent Canada at the upcoming World Championships being held from August 19 to 27 at La Loma Centro Deportivo in San Luis Potosí, Mexico.

Connell represented Canada at his first World Championship event in 2021, where he finished in 17th spot overall in Men’s Singles. He also recently competed for Canada at the recent Birmingham World Games.

Drury, who has stepped away from the sport for over two years to complete her studies has also represented Canada internationally at the elite level, but not yet at a World Championships event. Drury won bronze at the 2019 Pan Am Championships in women’s doubles.

Overall, the 2022 World Championships team has a lot of experience that could lead to podium success. Six of the members of Team Canada competed at the 2021 World Championships, with several members having represented Canada on a number of occasions. Combined, Frédérique Lambert, Samuel Murray, Coby Iwaasa and Michèle Morissette have competed forCanada fifteen times at the world level. Lambert has won three bronze World Championships medals and Murray has won two. This will be the first elite international event for Kurtis Cullen.

Michel Gagnon and Evan Pritchard have been selected as the coaches for Team Canada. Amy Barrette returns as the Team therapist and Racquetball Canada’s High Performance Director, Jen Saunders, is the Team Manager.

The World Championships are normally held every two years, but a tournament was held in the fall of 2021 to make up for postponements due to COVID. This year’s tournament will be a return to the competition cycle. The International Racquetball Federation introduced Mixed Doubles and the Team Event back into the competition format this past year, along with scoring changes. The result is a very exciting tournament.

Watch Racquetball Canada’s website and social channels for more information about our team and the World Championships leading up to the event. The IRF typically streams the championship round and Team Event live on Facebook and YouTube. Links to our social channels can be found at the bottom of this announcement.

We join Racquetball Canada in wishing all the best to all the athletes and coaches as they prepare for the championships.