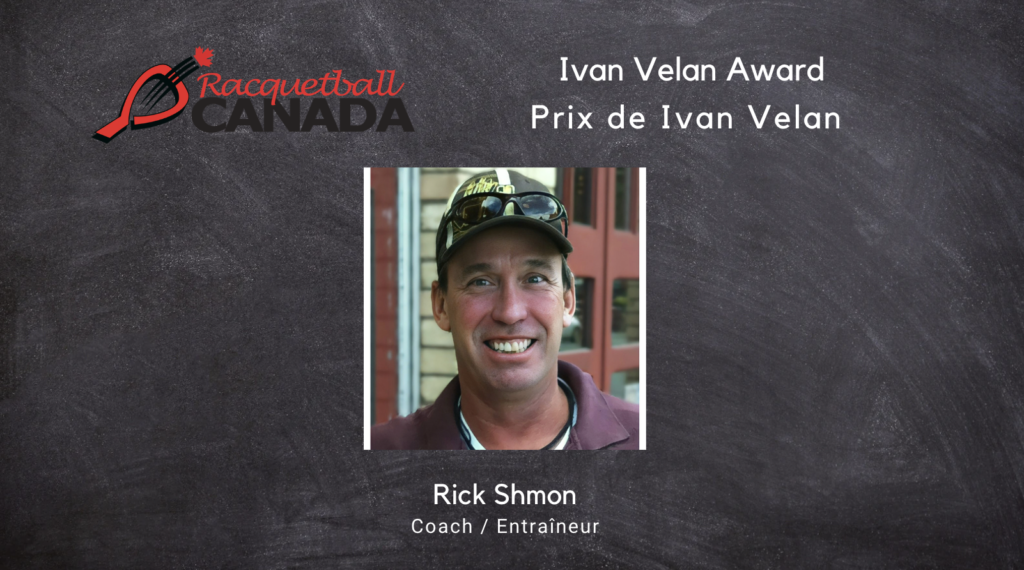 Racquetball Canada recognized Saskatoon’s Rick Shmon, as the recipient of the Ivan Velan Award for 2022 at the recent National Championships in Brossard. Rick was recognized alongside Mike Green, Roger Harripersad and Jack McBride, who were inducted into the Racquetball Canada Hall of Fame.

Rick was at the forefront of our sport here in Saskatchewan, with his greatest contribution being at the junior level both in our province and across Canada. He was tireless, impacting countless athletes as a coach, mentor and leader, and inspiring them to give their very best in all facets of their lives. In speaking with Rick about his recognition, his level of care and enthusiasm for racquetball and our sport community still is invigorating. You will find a short biography in this news post with a link to his full biography on Racquetball Canada’s website.

In addition to inducting Green, Harripersad and McBride into the Hall of Fame, Racquetball Canada inducted the Class of 2021 and 2020 who had previously been announced but weren’t formally inducted due to the cancellation of the National Championships for the past two years. Click on the year below to link to the press releases.

Click here to view the complete Hall of Fame Gallery

Rick Shmon coached junior programs in Saskatoon from 1976 to 1993, laying a foundation not only in Saskatoon, but also at the provincial level.

As Rick’s involvement in the sport deepened, he impacted an elite list of Saskatchewan athletes including several who went on to attain national team status. He was the provincial Coach for Saskatchewan for seven years and contributed as a volunteer on the Racquetball Canada Junior Development Committee. He also helped develop junior racquetball across Canada.

Rick had incredible impact on athletes and as a role model taught his athletes to do their very best both at sports and in life.

Click here to read more about Rick Shmon and his contribution to racquetball.

Mike Green has achieved outstanding success both in Canada and at the international level. As a member of Racquetball Canada’s national team, he represented Canada in international competition 32 times over a span of 23 years.

Mike had an enormous impact of Canada’s success at the international level. The following are some of the highlights of his outstanding athletic career:

Click here to read more about Mike Green’s accomplishments and his sport legacy.

Roger Harripersad piled up his podium results during the 1980’s, when the competitive field in Canada and abroad was at its peak. The highlights of Roger’s accomplishments include:

Roger proved his talents not only in Canada but on the highly regarded United States Professional Tour. He defeated legends like Marty Hogan, Mike Ray, Tim Doyle, Reuben Gonzales and Ed Andrews at a time when these players were top 3 on the tour.

Click here to read more about the Roger’s accomplishments and his what he contributed to racquetball.

Jack McBride has made a significant impact on the sport at the local, provincial, national and international level.

Jack’s involvement at the national level is highlighted by his tenure as the President of Racquetball Canada. From 2012 to 2016 Jack served as Canada’s representative and as the Regional Vice President with the International Racquetball Federation (IRF). He also served on the Pan American Racquetball Confederation Board of Directors in 2018.

During Jack’s tenure as President, he carved out significant time to contribute as the Host Chair of the 2014 World Championships and the racquetball event at the Toronto 2015 Pan Am Games the following year.

Jack spent countless hours to make these two events successful and to provide Canadian athlete the opportunity to experience glory on home soil.

Click here to read more about the contribution Jack McBride has made to the sport of racquetball.